Though it was a word foreign to the vocabulary of many Americans a decade ago, “gerrymandering” – the process of manipulating district lines so as to exert undue influence on the outcomes of elections – has become a relatively well-known concept in the US political lexicon. However, there are also other pernicious ways to manipulate election outcomes. One of these, a cousin of gerrymandering, is sometimes referred to as prison gerrymandering.

The concept, deceptively simple, may not initially seem like a problem. As part of the process of redistricting federal and state legislative seats, new district lines must be drawn to comport with the results of the United States Decennial Census; this is called “reapportionment.” Every elected representative is supposed to represent approximately the same number of people. To ensure this is the case, the census is supposed to achieve a full and complete count of the US population, counting everyone who lives in the US regardless of citizenship status or other factors. Through this process, the US also counts all incarcerated persons and records their present addresses – the prisons where they reside.

Though that may sound fine at first, one must only reflect on the disproportionate rates of policing on African Americans to realize there may be a problem. Since communities of color are significantly more policed (African Americans are incarcerated at more than five times the rate of white Americans), predominantly African American neighborhoods end up looking smaller than they are, and therefore end up losing representation through reapportionment. Over two and a quarter million African Americans are incarcerated today, and for the purposes of allocating legislative power in the US Congress and state legislatures, they are counted as living in the mostly-rural parts of the country that contain the prisons they’re held in.

In other words, rural, largely white parts of the country gain more power as more people are locked up. Meanwhile, the neighborhoods most affected by overpolicing lose power. This insidious reality is prison gerrymandering.

However, it’s possible to end prison gerrymandering. Through the process of passing accurate redistricting bills in our state legislatures, we can count incarcerated persons as residents of the communities they were taken from rather than the communities that imprison them. In late May, Washington state became the fifth state to end prison gerrymandering by passing such a bill, sponsored by Senator Jeannie Darneille (D-Tacoma). As a result, when Congressional and state legislative district lines are redrawn in 2021, communities subject to disproportionate policing don’t stand to lose political power at the same time. 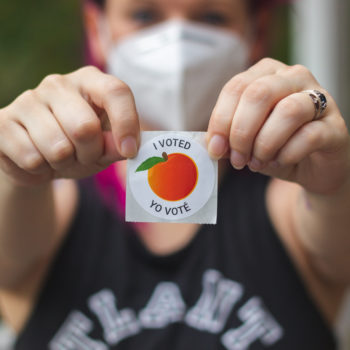 “At its core, though each election is a runoff where two people survived for a second round, Georgia highlights the absurdity of winner-take-all elections — especially when so many Americans are already frustrated by limited choices.” – Howie Fain